View source
watch 02:30
Dead Cells Final DLC - The Loop
Do you like this video?
Play Sound 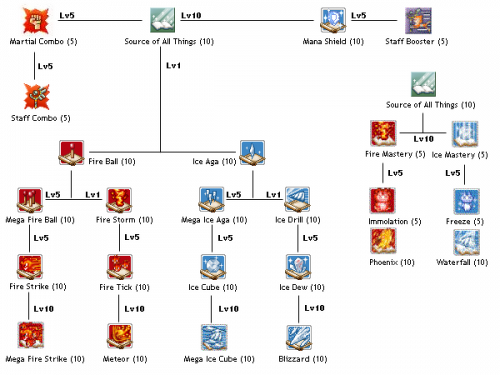 Mages use the black magic as their main attack occupation. Mages have various types of magnificent magic arts attack. Mages have low defense and vitality (HP) is small, but this is compensated by their formidable black magic attacks. Mages are good at long-distance ranged attack and kiting. Mages should primarily increase the intelligence (INT) stat.

① Go find "Mage's Association-NPC Manuel" at Town Elim.
② Ask Manuel how you can become a Mage.
③ If you successfully convince Manuel with
your plead to become a Mage, your job change will be complete!!

Two NPCs standing next to each other at the Mage area in Elim teach Mage skills, the left teaches fire and the right teaches ice. Initially you will not have enough AP to raise both, nor should you need to at lower levels. You should specialize in one element until you have your level 41 skill mastered (lv 10. Fire Strike or Ice Cube). Below is the table of the pros and cons of both fire and ice.

Kiting is the ability to cast a spell and run away from the mob while you prepare your next cast. Kiting is difficult due to Mage's base speed of -15. Kiting successfully means not getting hit and is better suited to ice mages since they can slow most enemies down. Fire mages usually take a Stand and Deliver approach but can kite some slower enemies.

It should be noted that you may only get one of either Fire Mastery or Ice Mastery and as they are pre-requisites for every level 80+ skill you will be restricted to only one side of the skill tree for your highest level skills.

There are two styles of attack for both fire and ice, Crush (aka Single Target) or Area of Effect (AoE) spells. Crush spells have better cooldown, do more damage, have a longer range and cost less AP per cast. AoE is difficult for a Mage due to their low DEF and average HP. The lower level AoE attacks do not have a big enough radius to make them useful.

Community content is available under CC-BY-SA unless otherwise noted.
Advertisement